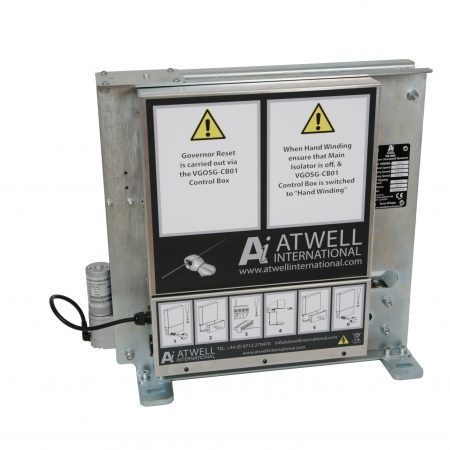 The VG Overspeed Governor is designed to be installed with new lifts and retro fitted to existing passenger and goods lifts, and when used in conjunction with other VG safety products will provide a complete solution to the requirements of EN81-20/50:2014.

The VG OSG connects to the main lift control panel via its own specific control box, VG OSG-CB01. From here, it can receive power and signals to tell if the lift doors are open, the state of the main motor contactor and the condition of the main safety circuit. The control box also has an internal battery backup system in case of power loss.

The governor incorporates a drop jaw mechanism which is monitored by electronic sensors and operates by releasing a 12v DC electro-magnet, which subesquently releases a drop weight that causes the jaw to drop and clamp the governor rope.

The governor is reset via the VG OSG-CB01 Control Box, where an actuator pushes the drop weight back in to its starting position, where it is again held by the electro-magnet.